Update: I just received a PDAir cover for the TG50. I couldn't stand the stock cover and this half-sized clear cover looks perfect. I ordered it through Meritline for $0.99. If you're still using a TG50, you may want to pick one of these up. The installation was a little tricky, as you have to take out parts from Sony's stock cover.

In my ongoing search for the ultimate PDA, I have recently acquired a Sony Clie TG50. (I'll admit it, I traded it for a used road bike.) This PDA is a PalmOS 5-based device with a backlit keyboard, Bluetooth, a standard headphone jack and more. It's thinner and smaller than the Tungsten W that it replaces, and with a 200MHz Arm processor is about as fast as the Tungsten C.

As mentioned, the Clie TG50, released in early 2003, is an early PalmOS 5 device featuring a 200MHz processor. This model was a departure for Sony, as it includes a thumb keyboard but is much smaller than the NV series and doesn't need to be flipped open like the UX series. It most closely resembles the Palm Tungsten C rather than other Sony Clie models. Overall, the device looks much sleeker than the Tungsten, though it's not as comfortable in my hand. The dimensions are 7.16 x 12.6 x 1.62 cm compared with the Tungsten's 7.8 x 12.2 x 1.7 cm. Smaller but about the same size.

The TG50 has a flip-top cover that looks cool (in a geeky Star Trek way) but doesn't really do much of anthing. I tend to remove the cover, as I've gotten used to having the PDA and keyboard always available, though if the Tungsten C is any indication, this will likely shorten the PDAs lifespan.

After a week of regular use, the battery seems to be about as good as the Tungsten C, which is quite impressive. Overall, it certainly seems like a decent device thus far. It is also one of the few Clie models to feature a fairly user-serviceable battery held in place by small phillips screws. These batteries are available cheaply on eBay.

Having used a 33MHz Tungsten W for the last couple of months, I'd almost forgotten what a difference the Arm processor makes. I know that this is one of the reasons that the Tungsten W's battery lasts so long, but the instant response of the faster processor really is a joy to use.

An initial complaint that I had with the TG 50 was the lack of WiFi. Instead, Sony opted to include Bluetooth. While I would still prefer it if the TG50 had both, I'm beginning to come around to Bluetooth. With it, I can still sync and surf wirelessly with my laptop and work machine, and I could also theoretically use a cell phone to gain Internet access anywhere. Bluetooth is turning out to be far less of a limitation than I had originally thought. A third-party WiFi Memory Stick exists and can be had for about $50USD now, but may be of limitted use given the next characteristic discussed.

The Clie TG50 is only a 16MB device. Of this, only a miniscule 11MB of RAM is user-accessible This is quite a dissapointment as, if one were to buy a WiFi memory stick, it is debatable whether or not there would be room to also install a mail client and web browser on top of typical Palm applications. Certainly NetFront and Agendus Mail would have a hard time living on the Clie at the same time as Documents To Go. This model could really use more RAM.

The most prominent feature of the TG50 is the keyboard. While it differs significantly from the T/W, it is actually very good. I manage to type quite quicky and far more accurately than I could with the T/W. I have found that the Clie keyboard has a few quirks that take some getting used to. For starters, there are two levels of function keys. Also, you have to hold the shift or function buttons while pressing the desired button to either raise the case or use the function keys. With the T/W, hitting the shift would raise the next key. This is a much better arrangement in my opinion. On the plus side, the keys are well lit and very easy to read. They feel much different than the T/W, more rubbery than metalic. This rubbery surface helps to make sure that your fingers don't slip, and allows me to type very quickly once I get going. The keyboard also has arrow keys to navigate where you're typing. This is a fantastic feature that I'm very happy to see. All-in-all, while a bit quirky, I quite like the keyboard. I've recently found a program called OKey written by Tatsuo Nagamatsu. With it, you can change the shift and function key behaviour so that it works like the Tungsten. That is, the next key press will be shifted. This makes the keyboard much more useable. I now consider this little application to be an absolute essential. I have included links to OKey and other "essential" software for TG50 owners on a seperate page.

The Clie also has a jog dial in place of a now standard D-pad. This seems to work very well with the PalmOS. TBetween the jog dial and keyboard, I rarely need to use the stylus.

Of course, being a Sony device, it excells at multimedia functions. The TG50 features a MediaQ controller which means that it has a dedicated controller for sound and grpahics functions. This actually makes the TG50 run about as quickly as the 400MHz Tungsten C. However, as this is a PalmOS 5.0 device, it doesn't use the now-standard Palm Audio. This can be corrected with Modern-Clie-Sound, which allows standard Palm apps like AeroPlayer and TCPMP to work correctly.

Unlike the higher-end UX50 and NR/NX Clies, the TG50 has no camera. This isn't a problem for me, as the included camera is typically quite low quality anyway. 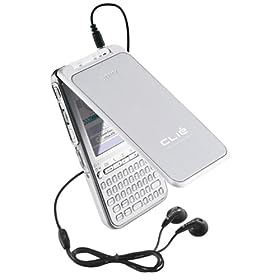 On the appliction side, the TG50 comes with the outstandibg Picsel Viewer and a host of other Sony-written apps. Showing its age, the TG50 does not include Documents To Go and the bundled MP3 player cannot play variable bitrate MP3s. Picsel Viewer does allow users to view most common document types and TCPMP works well in place of the standard MP3 player. Thankfully, TCPMP and most other PalmOS apps run well from the Memory Stick, as the Clie TG50 only has 11MB ofuser-accessible memory.

Overall, this is a very nice PDA. It's fast, has a great battery, has a real headphone jack and a thumb keyboard. The flip lid is a bit of a drawback, wifi and more memory would be nice, but I still haven't found a PDA that would suit me better at this point in time.